Angry Cow Gets Even

An angry cow gets even with its tormentors by crushing the owners car. In the most bizarre behavior ever witnessed by a bovine, this cow has some serious issues. 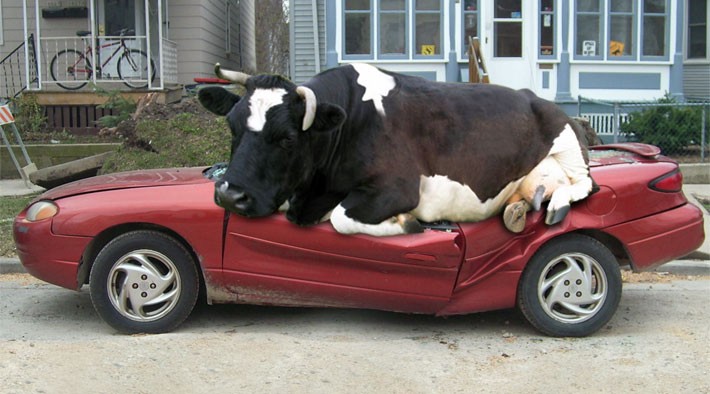 Cow tipping is the purported activity of sneaking up on any unsuspecting or sleeping upright cow and pushing it over for entertainment. The practice of cow tipping is generally considered an urban legend, and stories of such feats generally viewed as tall tales. But not in this case.

On what started out as a harmless prank, Jeff "Elmo" Bradshaw and Mike Lawrence were coming back from the Mall in Cairo Ohio as they were heading to Ottawa for a reunion. On the way, they encountered several cows along the side of route 65. The challenge was set as both of the former comedians decided to test out the urban legend of cow tipping.

Cow hunts down the tippers.

Let the lesson be learned never to tip a cow. It is unimaginable to think what happened next, but in the rarest display of vengeance, the angered bovine actually followed the trail of the two cow tippers and took it out on their car by climbing on top of the sporty compact and crushing it under its own weight.

The cow's owner, who wished to remain anonymous, was quoted as saying; "I'll be damned, I ain't never seen the likes in all my life. Must be because it's a red car I suppose."

The car was totalled

DGAF-inated Ringer Coffee Mug by KoiHosting
See other Dgaf Mugs at zazzle
Description: An angry cow gets even with its tormentors by crushing the owners car.